Our popular disc golf driver for players of all skill level in glow in the dark plastic. 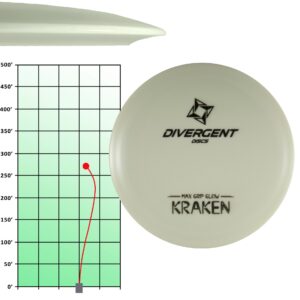 The Glow Kraken takes our most popular discs to times of day when it has never been useful before. In glow in the dark plastic, the Glow Kraken can be used both night and day. In addition to its ability to glow in the dark, MaxGrip Glow plastic is slightly stiffer than traditional Maxgrip plastic. This stiffness also gives the MaxGrip version a little bit more stability.

The Kraken is an all-purpose fairway driver that flies with precision to the target. It doesn’t have too much fade, nor is it too “flippy” for most players. When thrown with control and a smooth release, the Kraken can fly straight and predictably even for new disc golfers.